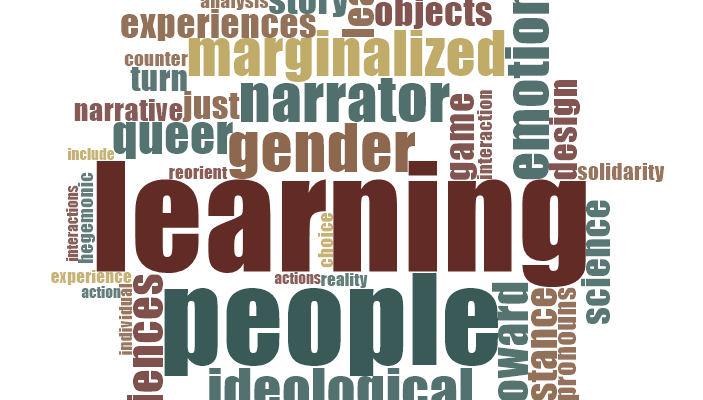 I presented this paper at the 2022 International Conference of the Learning Sciences this past June. The conference was going to be in Hiroshima, Japan but had to move online due to Covid travel and large meeting safety precautions. It was the right choice, but I was disappointed to not be travelling to Japan. I enjoyed presenting the paper to my colleagues and look forward to further developing this paper with additional cases.

In this paper, I illustrate how interacting with an immersive, virtual reality (VR) experience designed with queer phenomenological approaches can deepen understandings of gender and sexuality. I show how extending the queer phenomenological concept of reorientations (Ahmed, 2006) with complementary theories of ideological stance-taking (Philip et al., 2017) and emotional configurations (Vea, 2020) can highlight moments of emotional-ideological sense-making practices where learners become reoriented by reflexively negotiating between themselves and “othered” objects and people. I present an interactive, branching narrative told in immersive VR, in which the player uncovers the narrator’s memories of gender and sexuality-based marginalizations in STEM learning environments. I then present illustrative cases from an ongoing design study. Analysis of the VR interactions reveals how participants used the narrative and virtual objects to recognize normative orientations to STEM and reorient toward counter-hegemonic actions and marginalized people.

The paper proceedings from the 2020 International Conference of the Learning Sciences were released some months ago, but I’m just catching up with this longer blog posting now. Our paper, Queering Complexity Using Multi-Agent Simulations, was nominated for Best Student Paper which is a great honour.

I am a long-time activist-scholar, and when I began my Ph.D. it was with the intention to design and research better ways to engage people in learning about gender and sexuality. When I first began working with my advisor, Dr. Pratim Sengupta, and learned that he and Dr. Marie-Claire Shanahan did public computing research on the giant touch screen computers in the hallway of the Education building at the University, I thought, “Before I finish my Ph.D., I am going to make something queer to put in that space.” The other part of that thought was that my design was not going to be something queer that was easily digestible or a “nice” celebrationTM. This is known in the literature as homonormativity, a framing of queerness within heterosexual ideals so as not to be “threatening” to the normative frameworks of heterosexuality.

Fast forward about a year and a half later, and one virtual reality prototype, a funded documentary film + 360° film, and the Queering VR Chapter nearing publication, plus some conferences, speaking/exhibition engagements – it’s kind of a blur…

I never stopped brewing the idea of queering the boids simulation over that year and a bit, but in March of 2019 I finally took two weeks to hammer out a basic prototype that informed the initial design during our Leighton Studio Artist Residency at the Banff Centre for Arts and Creativity in April 2019, and was then used was in co-design sessions, two of which are preliminarily analyzed in this paper.

This paper proceeding, Queering Complexity Using Multi-Agent Simulations, is just the beginning and the expanded paper will be able to show cases and an extended analysis. For now, I hope you enjoy and feel free to check out the Flocking QT Stories simulation, which is now online at

In this paper, we demonstrate how multi-agent simulations of gender and sexuality-based marginalization can help us understand gender and sexual experiences as complex, emergent, multi-level phenomena, which involve dynamic interactions between individuals, groups and institutions. We present Flocking QT Stories, a multiagent-based simulation that illustrates how structural (macro-level) phenomena such as gender and sexuality-based marginalization and resilience can manifest through individual-level interactions between computational agents. We then present illustrative cases from an ongoing co-design study with people with lived or professional scholarly experience of gender and sexuality-based marginalization. Our analysis reveals how participants interacted with Flocking QT Stories through turning (Ahmed, 2006) their attention toward marginalized agents, and engaging in multi-level reasoning (Hostetler, Sengupta & Hollett, 2018; Wilensky & Resnick, 1999) to make sense of the audio stories embedded in the simulation as well as the macro-level, emergent behaviors resulting from interactions between individuals (boids), and between individuals and institutions.